Way back in February Clint of Pipes Scoundrels sent a huge package out of the blue . We had spoken a month or so before of a pipe that was in need of care but never figured out a plan. In the package a letter where he offered up a trade of sorts skill for skill, I love the barter system. In the package an incredible framed Pen & Ink work, that I watched though his blog come together. I was blown away by his skill and photos online. I had no idea it was coming my way, in person it was even more amazing, beautifully done. Also in the package a couple of Pipe Scoundrels stickers ( he has a killer logo) and three pipes in need of repair/cleaning. A couple John Bessai pipes one Canadian, one Pot and an Iwan Ries a unique shape I’m not familiar with. I was excited to get to work , this was the first time I was to work on someone else’s pipes but I got side tracked and side tracked again but finally I had some time to sit and finish, now the three are complete.

My plain was to write a little something on the history of Bessie pipes but as it has it some else has already done the work and a much better job then I would have. History of John Bessai (thanks to jguss from pipesmagazine forum) Classic Pipe Shops from years gone by in America – pipes and tobaccos and their influence, a well written and informative post. I will say the shop, The John Bessai Pipe Clinic was run between 1909-1993 at 35 Colonial Arcade in Cleveland Ohio. 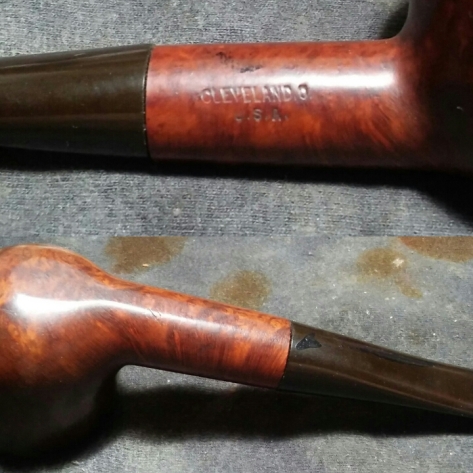 She was in need of help, an ill fitting replacement stem that was oxidized and had a couple of impressions, chunky crumbling cake, a few fills and a rim that was smacked around a bit, but I’m not afraid of a little work.

Starting with the stummel  and my PipNet reamer I removed the old cake and took the chamber back to briar. The chamber was in descent shape aside from a small burn/defect at the top of the draught hole, I will address this a little further down.

I cleaned up the rim with Method Good For Wood Polish and could now see the damaged rim better. The photo is poor but the top of the chamber/rim was reamed in the past with what I’m guessing  was a pocket knife, the edges of the rim were nicked up and missing small chunks of briar.

Using EverClear I ran a retort to loosen up the old tars, oils and tobacco. 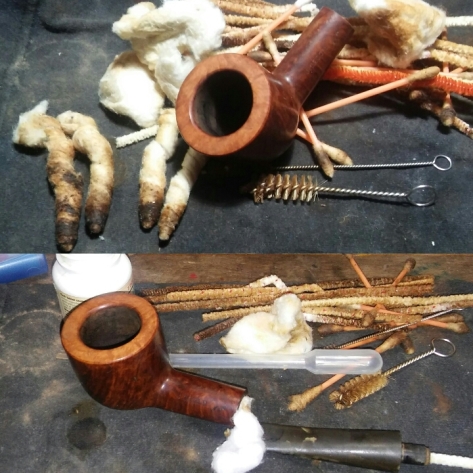 I now gave the stummel and stem internals a good cleaning, using EverClear, shank brushes, mortise brush, Q-Tips, cotton-balls and stiff/soft pipe cleaners. I unrolled cotton-balls, twist them into a swab and turn them tightly into the mortise. I then add EverClear to the chamber and allow the swab to soak up the alcohol, I would repeat this process a few time until the swab comes out clean. I cleaned the stem and draught with stiff/soft pipe cleaners working until my final pipe cleaner comes out as it when in.

There were a few dents on the stummel, using a household iron set to medium heat and a damp rag I would steam out the dents. By dampening the rag and covering the dents to be steamed out and placing the stummel to the heated iron, I would repeat this process a few times until I was satisfied all imperfections had risen .

There were a few fills that stood out and would have to be removed. Using a X-Acto knife and Method Wood polish, to soften the fill, I removed the old brightly colored filler. I cleaned the area to be refilled with an alcohol dampened Q-Tip. I now filled the pits with briar dust and Gorilla Glue and allowed it to dry. Once the new fill had time to dry I sanded the areas first with 800 grit sandpaper and finishing with 1000 grit sandpaper.

Now the ill fitting replacement stem, the tenon fit snug but the stem and shank had a poor fit, the stem was a bit larger then the shank. Starting with 220 grit sandpaper I sanded down the stem until a uniform fit between shank and stem was achieved.At this time I removed any tooth impressions and sanded the entire stem and the end of the shank with 400 grit sandpaper. I went back in with a brown touch up stain marker and re-stained the shank and fill areas. At this time I took care of the missing chunk at the top of the draught, mixing ash with a little water to make pipe mud I filled the missing spot with the mud and allowed it to harden. I checked before sending it off to Clint and the repair was solid.

The button had an odd indentation and was worn down.

I mixed thick black CA glue and charcoal powder together to make a paste, using a toothpick I applied the paste to the button hitting it with accelerator to set the glue.

Using needle files and sandpaper I began to shape a new button.

Thanks again Clint the pipes were a pleasure to work on, a nice change from my Custombilt craze .

Thanks for taking a look.